An El Niño event is marked by warm water in the equatorial Pacific. Effects of El Niño are often felt in California as changes the atmosphere and ocean, including increased rainfall and warmer temperatures. The Climate Prediction Center and the National Centers for Environmental Predition (NCEP) prepares updates regarding the El Niño Southern Oscillation (ENSO) Cycle.

The statements are updated once a month in association with the ENSO Diagnostics Discussion.

The Spray glider lab, headed by Dan Rudnick, calculates indices using glider-measured temperatures, An example is at 50 m along CalCOFI line 90 (off of Dana Point), averaged over the inshore 200 km and filtered with a 3-month running mean. For comparison the “Oceanic Niño Index” published by NOAA is SST in the Niño 3.4 region (spanning the east-central equatorial Pacific between 5N-5S, 170W-120W), with a 3-month running mean. The indices are remarkably correlated until this past year when the water off Southern California warmed much more rapidly than at the equator.  This remarkable warm event has affected the entire west coast, as seen in 10-m temperatures on CalCOFI lines 66.7 (Monterey Bay), 80 (Point Conception), and 90.

Data from active Spray gliders can be seen here.

The minimum average beach width (about 22 m) was during the 2010/11 El Nino. The maximum beach width  (about 63m) was immediately after a 2013 beach nourishment.  In mid-January 2016, the beach is the narrowest since 2012, before the nourishment. The width is the distance from the backbeach (e.g. rocks bordering HWY 101, seawall, parking lot edge) to MSL (mean sea level) beach elevation. The width is averaged over 1.7 km of coastline, and some locations are relatively wide or narrow. The beach is widest in late summer when waves are small, and narrowest in late winter, after erosive storms. At the end of summer 2012, the beach was about 10 m wider than the typical annual prenourishment maximum (dashed horizontal line). Then, in October of 2012, an additional ~50,000 m^3 of sand was mechanically placed on the beach, increasing the beach width even more, and potentially helping to maintain the wide beach in the following years. The recent July 2015 width is about 40m more than the maximum erosion in Feb 2010 (the last El Nino).

Width of six southern California beaches (see legend) versus time. The width, the distance from the backbeach to MSL (mean sea level) beach elevation, is averaged over a few km alongshore at each beach, and the mean removed. All beaches are widest in late summer when waves are low, and narrowest in late winter, after erosive storms. Beaches were narrowest in Feb 2010 (the last El Nino). 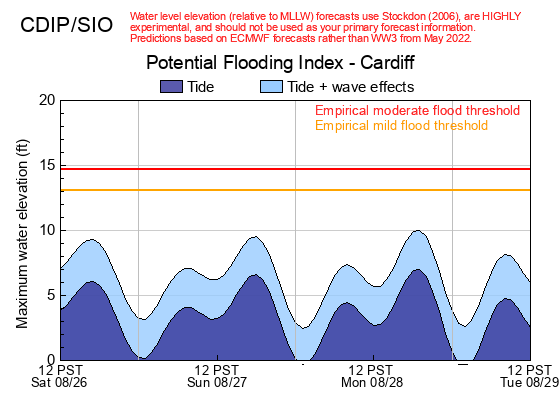 A Tour of El Nino